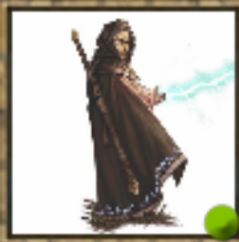 Thwack! A kick to the head sent the world spinning left a dozen times, then back right a couple times, before the retching began. Orin the halfling spasmed in the muddy alley as the two thugs took turns kicking him.

Orin had conned or outright stole whenever he could except from regular folk. The regular folk of the city had the misfortune of being trapped between the nobles and the gangs and did not have much to steal regardless. Orin grew those coins gambling in the back rooms of the West End. He could lie with a smile or a frown far better than the average crook. He had won too much money from the wrong people and now he was dying.

“No doubt about it, you're dying,” someone said. Time seemed to stop as Orin’s unfocused eyes saw a glowing lady looking down at him. “Oh, I've got'em right where I want'em,” Orin spoke somehow without his physical mouth moving. No, that cannot be good.

“Here's the deal, you can die … or you can work for me,” she said. The glowing ladies’ words were lite in tone but carried a supernatural heaviness he had not heard in life. “Till?” Orin replied. “Till you take the first option,” she stated. “That's not much of a deal,” Orin said hesitantly.

“The dying never get a good deal. A wise man would simply die but you are not a wise man. That is why I'm here asking you,” the glowing lady said while coming into focus. She was a white-haired dame in a long dress untouched by the filth and blood of the alley. The thugs were frozen in time like statues. “I could tell you that you'll gain powers, do good in the world, all true enough but … You know I'll be getting more out of the deal than you,” the lady was clear as day now and nearly as bright.

Orin resigned himself to his fate, “How does this work?”

Time started to slowly click forward, and the lady began to fade as she spoke. “Say this,” she said before placing words in his mind. “Benevolus Sanare,” Orin somehow actually spoke through his bloody mouth. Orin’s ribs clicked back together, his bleeding stopped, and his head cleared.

Time was moving faster now, returning towards normal. The lady faded further and said “Stand up and move your hands in a circular motion like this and say…” Orin stood as fast as he was able. The thugs slowly started to react. More words appeared in his mind and Orin spoke, “Brachium Mortem Flagellum.”

Thick black smoke poured out of his mouth as he finished. The smoke encircled Orin and smoky tendrils reached out to grapple the two assailants. They tried to avoid the black ethereal arms but the tendrils wrapped around them easily. The touch of the arms drained life and their faces were frozen in masks horror before the smokey arms dropped them to the ground and dissipated.

“Go somewhere safe to rest, I'll be in touch,” she spoke and faded completely away not giving him a chance for questions. Orin stood silently for a moment in the alleyway wondering about how bad a deal he might have made before retrieving coins from the two dead thugs, and going forward into his new life.